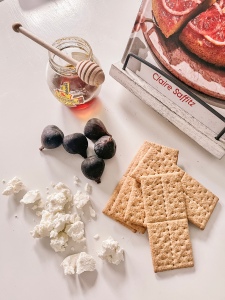 This week we’ve tackled recipes 16 and 17 from Claire Saffitz’s Dessert Person—the Graham Cracker Crust, another one of Claire’s Foundational Recipes, which is used as the base for the Goat Cheese Cake with Honey & Figs. This is the second last recipe in the Loaf Cakes and Single Layer Cakes section—we can’t believe we’re already so close to finishing the first chapter in the book!

Good morning, good morning to you all and hello to some lovely warm, spring weather in Ontario (finally).

The arrival of warm weather always brings back a memory for me…my Dad would go to the grocery store and find that the fresh boxes of figs had arrived and were in season. He’d buy a full case and bring it to my Nanna’s home for her, and upon seeing the figs, her face would light up brighter than I’d ever seen. She’d then proceed to sit in her kitchen, the light beaming into the room from her open side-door, and eat the figs, one by one until the case was gone. She’d accompany her feast with talks about her childhood in Italy where she could pick a fig off the tree whenever she wanted and enjoy it. Because of Nanna’s fondness for figs, I tried many a time to fall in love with them like she had, but always fell a bit short. However, seeing that this week’s recipe included my Nanna’s favourite thing and my favourite thing (dairy dessert…you’re not new here), I was very excited to make it and had been looking forward to it since I got the book.

In traditional Lauren fashion, we had some snags with this recipe. First mission was finding the figs. I ventured to a Produce Depot in my city which has every type of fruit under the sun and found one…slightly decrepit looking…case of figs. Having always had my parents be the ones to select the figs, I had no knowledge of what would be good or bad, so I just prayed I picked the right ones and went on with my purchase (spoiler alert—they were not the right ones). Then came the making of the cheesecake. You first make one of Claire’s other Foundational Recipes which is the Graham Cracker Crust. This was pretty simple to make and to press into your pan and smells extremely good coming out of the oven. Then you make your cheesecake base which combines goat cheese and cream cheese for a lighter, tangier flavour. Seeing all this cheese mixed together with the combo of sugar and lemon was like a religious moment for me. The batter tasted delicious and I was so excited for what was to come.

… Maybe a bit too excited because I then made some mistakes. The trickiest part of this recipe, in my opinion, is how you have to cook it. Firstly, you have to wrap the cake pan in multiple layers of aluminum foil and perhaps I should have done this more diligently in retrospect. Then, you cook the cheesecake in a water bath of boiling water that you place in a roast pan that sits in your oven. Well friends, this was tricky. I didn’t have a roast pan so had to scramble to find something that would allow enough space for the water and the cake pan—I settled on my cast iron. And it was so hard to gently place the cake pan into the boiling water when the pan wasn’t very large. Safe to say it was a bit stressful but what was more stressful was when it was done.

You have to let the cheesecake sit and cool for a very long time—two hours with the oven door open, and two hours in the fridge. When I took the cake out of the tin, I realized that despite all my layers of foil, a lot (and I mean A LOT) of water got through and my cake was, in a word, soggy AF. I was super sad but decided to persevere and add the fig and honey topping, assuming that this would add a nice flavour and the cheesecake would still taste fine. My boyfriend had never tried figs and I was so excited to see his face light up in the same way my Nanna’s had when he took that first bite…well, that didn’t happen. The figs were not good and the cheesecake was soggy. I threw out the figs from the top, put the cheesecake back in the fridge and left it for 2 days out of pure frustration. Then something magical happened—the cake was no longer soggy, the rancid figs were gone and the cake tasted amazing, and I loved it. So, safe to say I will be making this recipe again, just probably with figs my Dad picks out for me and with so many layers of aluminum foil, I lose count. 4 stars for me for taste, although I will say, I believe that this cake baking is a tad more complex than it needs to be with the water bath, so I give the recipe itself 3.5 stars. 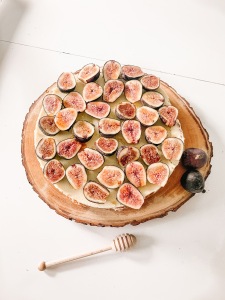 Welcome back, everyone! Another week, another cake—my friends, family, and neighbours are very much on the Dessert Person train at this point and are always wondering what I’m baking up next and divvying up between them. Very grateful for all my taste-testers so I don’t have to consume full cakes myself on a weekly basis!

This week’s recipe was the Goat Cheese Cake with Honey & Figs. I was really excited to make it because I love cheesecake and was really curious to try this particular spin on a classic dessert. Making this cake also made me think about our Nanna. When I think of cheesecake, I think of The Golden Girls, which was one of her favourite shows and something my siblings and I always watched with her; figs also happen to be her favourite food (arguably her favourite thing ever just in general – see Lauren’s detailed account above). I think she would have been a big fan of this bake!

All of our bakes so far in this chapter have been relatively low on the technical scale, but this one was definitely more complex. The cheesecake is made using the hot water bath method, and we’d heard from fellow Dessert People that there could be some issues with water leaking in to the cake. The first step was easy—make Claire’s Graham Cracker Crust using a food processer, mold it into a springform pan, and bake. Once the filling is made (a combination of both cream cheese and goat cheese—about equal parts of each—with sugar, some cream, lemon, vanilla, and eggs), you pour it into the baked crust, and this is where the stress sets in.

First, I was convinced I’d messed up my filling because it is a LOT thinner than I’d expected it to be. My crust had also slightly come away from the sides of the pan while it baked, so I was concerned about the loose filling spilling over and causing textural issues. Once you have the batter poured in, you wrap the springform pan in tinfoil; I’d been warned about the potential water leakage/soggy crust problems, so I wrapped that baby up as tightly and in as many layers of tinfoil as I could, laying the tinfoil along the bottom of the pan and then folding it up along the sides. Once it’s tucked away in its foil cocoon, the springform pan is placed in a roasting pan that’s had boiling water poured into it, and bakes for about half an hour. Then, the oven is turned off and you leave your cake in the hot water bath with the oven door slightly ajar for another two hours, allowing the cake to fully set. After THAT, the cake sits in the fridge for at least two hours to firm up even more. Never did I ever think I would dedicate 5 hours to making one cheesecake… 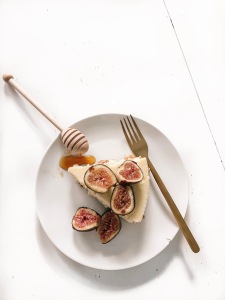 After the two-hour rest in the fridge came the moment of truth. Releasing the cheesecake from the springform pan was a bit of a debacle; although my cake filling did set properly, it was still extremely soft, and so I did get some breakage as I tried to get it out of the pan, and cutting clean slices was basically impossible.

On a positive note though, I did NOT get any water leakage (don’t ask me how… I honestly think this just comes down to luck vs. any real skill), I didn’t have any cracks on the top of the cake (a common issue with cheesecakes), and my crust stayed so nice and crispy. While the whole process was a little more involved and finicky than I think is necessary, the texture and flavour of this cake was unreal. It was light, soft, and silky smooth; it wasn’t too sweet; there was such a nice tang from the addition of goat cheese; and the little hit of lemon balanced the whole thing out so well. The cheesecake is topped with figs that are drizzled in olive oil and honey, which I wouldn’t have thought of myself, but it was a fantastic combo.

This cake was messy, anxiety-inducing, but absolutely delicious! I had really great feedback from my taste-testers on this particular recipe. I’m not sure I’ll be beating down doors to use the hot water bath method again any time soon, but I absolutely loved this cheesecake. If I’m going just on flavour, it’s a 4-star bake for me!

Coming up next week: the finale of the first chapter of the book – Pineapple and Pecan Upside-Down Cake!

View all posts by sisters&saffitz