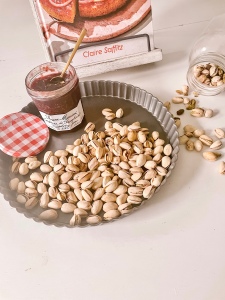 Welcome back everyone, and Happy Sunday! This week’s recipe from the Pies and Tarts chapter of Claire Saffitz’s Dessert Person is the Pistachio Linzer Tart. This marks bake number 22 for us!

Hello all! And hello to beautiful warm weather, sunshine, and the beginning of patio season in Ontario! This weekend was lovely for so many reasons; I was off call, the weather was wonderful, the streets were full of happy people eating at restaurants once more, and I got to make another killer dessert from Dessert Person (apologies for my failure to perform last week). The recipe up this week was the Pistachio Linzer Tart. This bake came at a convenient time for those of us baking in order because I had a bunch of pistachios left from the galette last week! I just want to take a quick moment to point out something obvious and that is—pistachios are expensive. I know Claire says you can sub them out for another nut, and I’m glad she does because my lord, they break the bank. Aside from this recipe sparking my frugality, I was excited because I had never made, nor heard of, a linzer tart before.

This recipe at first can seem a bit daunting. Firstly, it calls for a pastry bag which always sparks some fear for me, and the picture in the book versus how making the dessert is described was confusing to me. Her photo looked perfect and neat (as per usual), but when I was visualizing how it was going to come together based on the steps, it didn’t seem to make sense. You start off by toasting the pistachios and then combining them with flour, cinnamon, and salt in a food processor. I ended up realizing that I had some unsalted pistachios and some salted, so I just omitted the salt in the mixture. You then remove the dry mixture and add sugar and butter to the food processor, blend until smooth, and then add an egg, vanilla, and lemon zest. Finally, you re-add the dry, nutty mixture and create a SUPER thick batter.

Here was when the beginning of my downfall began. Being the sub-par mathematician that I am (stay in school kids), I foolishly thought that instead of using a 9-inch round, I could use a 9-inch square tart pan and be fine. Wrong. The area of those two things are vastly different. I took out what I believed to be half of the mixture and spread it into a thin layer at the bottom of my tart pan and just kept a keen eye while baking to make sure it didn’t burn. It came out after 20 minutes and looked beautiful—nicely golden, firm to the touch. I was so pleased and thought I had evaded any shenanigans for this bake. Wrong. 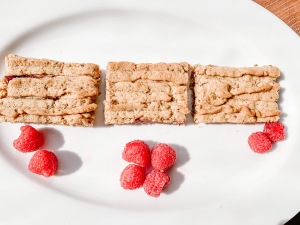 The next step is to add the jam of your choice combined with a bit of lemon juice on top of the tart bottom you just baked. I chose raspberry because I thought it would compliment the pistachios well. You leave about a 1/2inch border on the end when spreading the jam so you can get that effect of the jam being enclosed by the tart after you add the top layer. After adding the jam, I still felt great. But then things really took a turn.

For Christmas one year, my lovely parents got me this tool that helps you to ice cakes/pipe things instead of using a pastry bag. It is plastic, super easy to fill, and then has a button you press to slowly release whatever is inside. It is wonderful and I would 10/10 recommend for ease of use and also less waste because you aren’t discarding pastry bags. I filled my little tool, chose which tip to pipe with, and then disaster struck. I maybe piped two or three lines across the tart and was out of batter. I felt so defeated, I tried to spread what I had piped to see if it would cover things (massive mistake), I yelled, I almost cried. It was not good. Then my lovely partner, looking at me with so much sympathy, said “You gotta make more batter.” He was right. I was out of pistachios so I made a quick run to the grocery store and when I came back he had cleaned everything for me and prepared all the ingredients so I could start fresh (mad props to Ben on this recipe). I made another full recipe and used all of it to pipe on the top. Just a heads up, even with this tool, piping the batter was difficult because of the thickness of it. So just go slow and if the line breaks, just keep going—it’ll still work out fine.

The completed tart bakes for about 30 minutes, just as the sides are beginning to become golden. The colour of the tart is quite pleasing, especially with the golden hints over the top, but I gotta be honest, it’s not the prettiest dessert. I don’t know what kind of piping tool magic Claire had but I don’t find the aesthetic is as easy to replicate with this recipe. Taste-wise though I really liked this tart. The jam adds some needed sweetness and moist-ness (if it’s not a word it is now) to the dessert, and the tart itself taste likes a delicious sugar cookie. You definitely get the hints of cinnamon and lemon zest in the tart; once again though, I think Claire went a bit heavy handed with her amount of citrus zest because the lemon does tend to overpower the pistachio flavour. All in all though, a fairly simple dessert (if you have the right sized dish or can do math correctly). And I always find it’s fun to bake desserts from other countries. I’d give this one 4 stars! 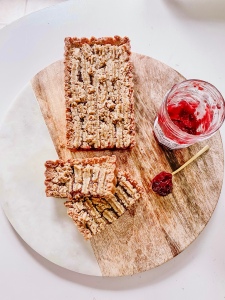 It’s been a great few days here in lovely Northern Ontario, with so many hot, summer days, my first official beach hang of the season, a garden that is exploding, and—at long last—a pandemic lockdown that has eased up and the opportunity for some long-awaited patio drinks with friends. I kept postponing my plans to make this week’s recipe in place of outdoor activities, but I was finally able to squeeze in some time to bake Saturday afternoon in between visits to our very-much-missed local establishments! 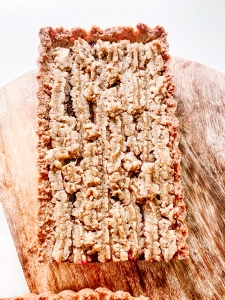 This week’s Pistachio Linzer Tart is an Austrian dessert that I was unfamiliar with. I have made Linzer cookies before around Christmas time, and knew that there is usually a nut-flavoured dough of some kind, and a jam of some kind. Both of those things came into play in Claire’s recipe, with toasted pistachios being blended up with flour, cinnamon, sugar, butter, egg, vanilla, and lemon zest to create a batter, and a thick layer of raspberry jam in the middle. It was a pretty straightforward bake in terms of both ingredients and process compared to the last two weeks.

The tart is baked in two rounds. Once the batter comes together, it is spread thinly into a tart pan (I tried out a new rectangular shape for this recipe, which I loved! These are the things I get excited about this days…) and then bakes for about 20 minutes. Once the tart shell has cooled, the raspberry jam, thinned out with a bit of lemon juice, gets spread over top and then the rest of the batter is piped over the jam to close in the tart. Piping has NEVER been my strong suit. I don’t know what it is—I’ve tried all kinds of different bags, tip sizes and styles, mixtures thick and thin, and I never seem to be able to control what I’m doing. Not looking promising for the Layer Cakes & Fancy Desserts chapter, but I’m bound to improve eventually. I chose a star-shaped tip in this case in hopes of creating a bit of a ridged effect on the tart similar to the picture in the book. This worked out decently well, but the batter was SO thick that it was extremely hard to get out in thin, even lines. I managed to fill in some of the breaks and gaps as I went, and the end result was pretty good, but it’s not the best looking thing I’ve ever made, that is for sure. That tart then baked for another 30 minutes—which I ended up doing in two installments of 15-minutes each because, again, it was a sunny Saturday and there are finally things to do again! No harm, no foul. 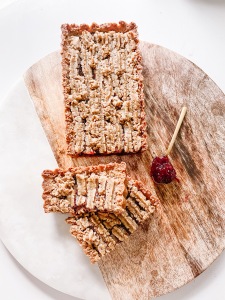 The flavour of the tart was wonderful! I used about half the amount of lemon zest the recipe called for because I learned my lesson from the extremely orangey rhubarb loaf, and the pistachio and raspberry came through so nicely. I would probably make just this tart-shell batter again and eat it on its own because it was SO delicious. The base is basically equal parts pulsed up pistachios and flour, so the nutty flavour was super prominent and it smelled amazing; it also had the best flaky texture from all the butter. The top part was a little softer than I was expecting, but I still ended up with a nice crisp from the bottom layer. Now that the world is (slowly, optimistically) starting to open up again, let’s hope the next time I eat a linzer tart, it’ll be in Austria! This was a 4-star bake for me!

View all posts by sisters&saffitz